Downtown breathes all that is Jazz at annual festival 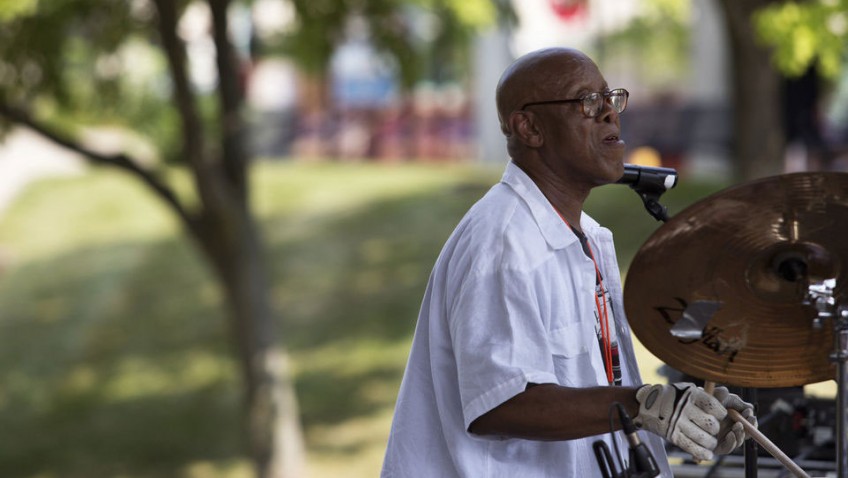 FLINT, MI – The vibrant sound of guitars, keyboard and drums overflowed Sunday, Aug. 10 out of Riverbank Park in downtown Flint, moving passersby and enthusiastic fans attending the last day of the annual Flint Jazz Festival. For 33 years, the festival presented by the Greater Flint Arts Council has filled the streets of downtown Flint with the smooth and funky sounds of modern and classic jazz.

The three-day festival is held in the park every August and brings in local and national jazz talent to bring out the joy and fun in downtown Flint. Many of the attendees, such as Flint resident Lawrence Ratliff, have been coming to the jazz festival since its first notes rang out. “I was introduced to jazz at a young age and have always had a love for it,” said Ratliff, as he waited for the first act to take the stage. “The festival is different compared to the early days. There were a lot more people attending back then.”

While many jazz lovers arrived early to set up their lawn chairs at prime seating spots along the riverfront, only around 100 people were at the festival when it started. As the jazz flowed, more people began to show up and find a spot to enjoy the music with friends and family. “I use to come out as a vendor and sell African clothes, but now I come out to enjoy the festival,” said Flint resident Reginald Terrell. “The jazz festival is a great thing for the city. It helps bring out the true spirit of Flint.”

The opening act, Flint based jazz band Smooth Operations, took to the stage in the early afternoon, playing their funky blend of Detroit and Chicago jazz. Lead vocalist Bernard Jackson appealed to the crowd as the band warmed up, stating his shared troubles being a Flint resident. “We’re in this together,” he said. “They raised my water bill just like they raised yours.” Being the first act was not without technical difficulties. A wiring issue hampered band guitarist Herb McGown’s first solo of the show.

By the next song, the issue was resolved and McGown nailed an amazing solo riff that dazzled the audience. Following The Smooth Operations, Greg Williams took the stage, followed by the People’s Jazz Band with headliner and three-time Grammy award winning jazz bassist Christen McBride set to take the stage around 7 p.m.

Admission to the festival is $3.