FLINT, MI –The transformation of the abandoned industrial brownfield in the middle of Flint called Chevy in the Hole into walkable greenspace is about to begin. The Genesee County Land Bank and city of Flint, which owns the site, have a plan to turn Chevy in the Hole into Chevy Commons, a parkland along the […]

FLINT, MI –The transformation of the abandoned industrial brownfield in the middle of Flint called Chevy in the Hole into walkable greenspace is about to begin. The Genesee County Land Bank and city of Flint, which owns the site, have a plan to turn Chevy in the Hole into Chevy Commons, a parkland along the Flint River with wetlands, woodlands, grasslands and other green areas.

The first phase of that plan will break ground in late summer or early fall, said Christina Kelly, who is directing the work for the Genesee County Land Bank. A $1.6 million grant from the U.S. Environmental Protection Agency paid for a draft plan to transform the site, with the majority of the money going toward the upcoming construction, Kelly said. Mayor Dayne Walling said he’s excited to see the project move forward. He said the plan meets the expectations that city officials heard from residents when updating Flint’s master plan in 2013. He said the plan for Chevy in the Hole calls for access to the Flint River, recreational space, an area for events and recognizing the history of the site’s automotive and Native American heritage.

“I’m excited to see the progress on the site and excited to see a comprehensive site design that shows how all the pieces fit together to make an interesting, natural space right in the heart of the city,” he said. Kelly said that for years, ideas on what to do with the site have been tossed around by different organizations throughout the city, including the land bank. “Now, we’re finally hitting the ground running. We have some money, we need to spend it,” she said. The $1.6 million will go toward the first phase of the project, which Walling said will take up space by Chevrolet Avenue, which intersects the west end of the site, and run along Glenwood Avenue, which borders the southern side of the west end.

“A portion will be available and open to the public in 2015,” Walling said. That first phase will include a parking area, walking paths, and shrubs, Kelly said. The city and land bank will take public comments on the plan to transform Chevy in the Hole into Chevy Commons in a public meeting Thursday, April 10, Walling said. “Now it’s time for the public to give input and respond to the initial design concept,” Walling said. “The expectation is that the community will respond positively to the design because it incorporates all of the elements that we have heard (from the community).”

Kelly said that the land bank is working on getting a $1.2 million grant for phase 2, which will develop more space east of Chevrolet. After that, it’s a matter of securing the funding. “It’s going to take a couple of years to secure the additional funding and do the work, but a portion of the site will be greened and open to the public next year,” Walling said. That greening process includes dumping dirt over the existing concrete that covers the approximate 60-acre space in what Kelly called a “landscape cap.”

Tim Monahan, former president of the Carriage Town Historic Neighborhood Association and resident of Carriage Town, the neighborhood that sits just across the Flint River from Chevy in the Hole, said he’s looking forward to seeing something done. “I am so looking forward to it. It’s so disgusting for people coming in off the expressway to get to Kettering, The Children’s Museum or Carraige Town,” he said. That’s a horrible first impression. What do you see,? Trash. … This has been a long time coming.”

The site has been no stranger to change, though this will mark the first time in almost two centuries that it hasn’t been a part of some type of commerce or manufacturing, according to Genesee County Historical Society President Dave White. He said the site was a sawmill and paper mill before it became the home of Flint Wagon Works in the 1880s, the first incorporated business in Michigan. General Motors’ first engine was built on that ground and at one point there were 14,000 employees who worked there. Then it fell into disrepair, with the last building torn down in 2004, White said.

“It showcases how times have changed. We don’t put industry on the river anymore. We prefer to be on the river and use it for enjoyment,” he said. “This is a great thing for Flint, for us to take back the river and enjoy it’s beauty.”

Help Us Build a Paddlers’ Landing at Mott Park! 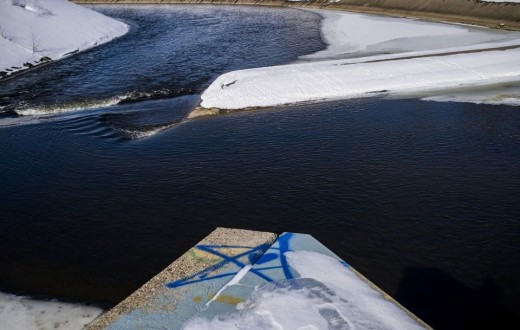